DVG recently completed a large scale router installation for Maryland Public Television (MPT) in Owings Mills, Maryland. The 400 Series multi-format router by Utah Scientific was configured with 528×528 cross-points of HD-SDI Video, 128 x 128 AES Audio, 64×64 Time Code, and 64 x 64 of machine control. Multiple AES audio signals were multiplexed and demultiplexed over MADI and connected to and from the video router where audio and video signals were embedded and de-embedded within. Both traditional X-Y hard panels and GUI SoftPanels were used to allow flexibility of router control. Over 2000 custom cables totaling over 30,000 feet were created.

“Maryland Public Television knows the migration to IP is inevitable, but like many other broadcasters, it does not have the resources to make a wholesale, overnight switch to IP,” said Chuck Heffner, vice president of broadcast systems, Digital Video Group. “The station sought our help in finding a hybrid solution that can run in existing SDI environments, but can also support a gradual and cost-effective transition to IP.”

He added, “The UTAH-400 was a great choice for the upgrade. Not only does the router come with Utah Scientific’s no-fee, 10-year warranty — unheard of in the broadcast industry — but it’s based on a unique hybrid signal architecture that offers a single platform for all types of signals, including those used in IP networks.”

MPT was able maintain a full production schedule while the new router was installed. The on air transition to the new routing system was seamless and on time. MPT is the only state-wide broadcaster in Maryland. MPT is a member of the Public Broadcasting Service.
Article about the project in TVTechnology

Article about the project in TVNewsCheck 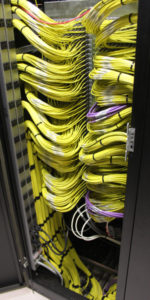