WTTV, Nexstar’s CBS affiliate in Indianapolis, Indiana, has debuted a new set that combines wraparound walls with freestanding structural and technology elements to create a flexible and open space.

Like many recent Nexstar sets, the primary anchor desk is centered in a corner of the studio with floor-to-ceiling seamless 3.9mm pixel pitch LED video walls from Neoti’s LE Series meeting at a 90-degree angle in the corner. 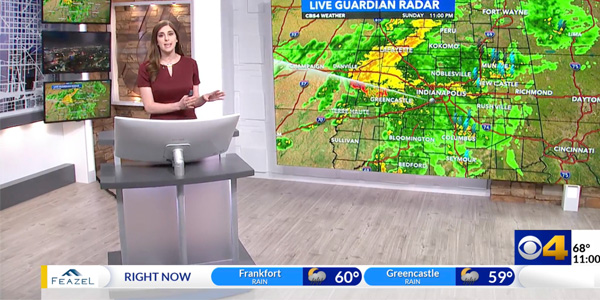 The corner, however, is dominated by a two-faced LED column that runs the same height of nearly 10 feet, breaking up the two walls on either side and providing a key focal point between anchors on two shots, giving the station the opportunity to showcase its logo and “Your News Now” branding prominently but in a twist on the typical centered branding location.

Camera left of the anchor desk, which is fronted with additional video panels, is a 3×3 55″ Philips video wall mounted inside of a double internally-lit curved frame structure that looks a bit like an upside-down “U.” 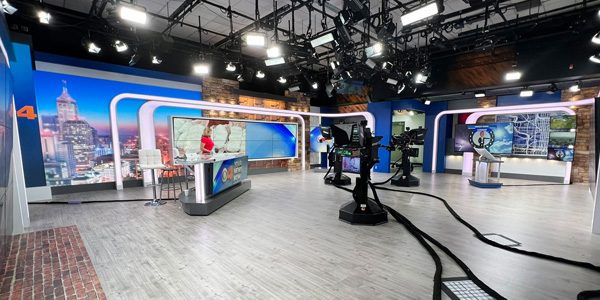 This same element is repeated camera right in a wider format that frames out a 4×2 55″ Philips array which uses a TVOne Coriomaster wall processor with the LED display layered behind it. Both of these video walls are positioned so that they can be used in a variety of ways, including both from the anchor desk, in tosses or in standup shots.

An additional venue is found in a corner created to help disguise the studio entrance that features a freestanding, wild monitor unit.

Continuing on past this space is another corner configured as a weather and traffic center that includes a presentation pod and a background featuring a stylized city roadmap and CBS-eye.

Four additional wall-mounted panels and another large-scale video wall of 49″ displays are used in this space for weather and traffic maps with a frame wrapping the space.

These back-lit structures are positioned in front of the structural walls that wrap around the set and are finished in a variety of ways — including faux stone or brick, blocky textural panels, backlit panels and the occasional solid wall.