DVG  recently installed a 144-TB Facilis TerraBlock shared storage environment for  Maryland Public Television in its post production facility to increase capacity, accelerate post production and enhance project collaboration.From series “Outdoors Maryland” to “Chesapeake Collectables,” the systems will play an integral role in MPT’s creation of weekly programming for the state of Maryland. MPT also is using the TerraBlock systems in production on national programs such as the long running “MotorWeek” and the soon to be released children’s science show “Space Racers” that will be shared with PBS affiliates across the U.S.

“With the volume of work our team handles every week, we have to be able to collaborate quickly across the promo, graphics, audio, online and offline departments. We looked at a lot of solutions, and TerraBlock hit all the marks at a price we could easily manage,” shared MPT Post Production Supervisor Bill Dukes. “Since installing our TerraBlock network, we’re already running smoother and faster than before, even though we now have more clients connected. It’s really streamlined how we work across departments.

The installation, which required the transfer of 60TB of data from MPT’s former storage solution to the TerraBlock environment, was challenging however, in less than a week, DVG had the systems up and running flawlessly. Now at the helm of MPT’s facility setup, the TerraBlock network is connected via 8Gb Fibre Channel to eight Avid® Symphony® workstations, six Avid® Media Composer® suites, two Avid® Pro Tools® stations for audio post and two Avid Deko® graphics systems. A Mac system running the Adobe® Creative Suite®, Storage DNA for digital archiving and a Digital Rapids encoder are also linked to the TerraBlock environment.

More details on this project can be found in this article from Creative Cow. 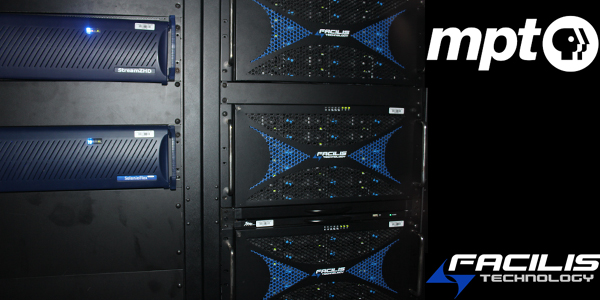